A rare collection acquired via former Spurs kitman Roy Reyland featuring a pair of Sol Campbell’s Uhlsport boots match worn by Campbell during the 1998-99 season for Tottenham Hotspur. This was a successful trophy winning season for the club with Sol Campbell captaining the side to a 1-0 victory v Leicester City at Wembley in the League Cup Final (Worthington Cup).

The kitman stated that Sol only wore a pair of boots for 2 games and that they were match worn by Sol. Reyland removed the inner soles to be used in Sol’s next pair of boots!

The boots are over 20 years old now but are in very good overall match worn condition. They have 9 written on them in black marker. This can also be seen in a match photo of Sol playing against Newcastle United with 9 written under the boot on this occasion.

Included in this very special collection is one of Sol’s home shirts from the same season. The shirt has not been match worn but Sol has signed it under his famous squad Number 23. A fabulous full and unrushed signature however the pen was unfortunately running out of ink so the autograph is faint.

To complete this unique collection is an original 10×8″ action photograph showing Sol wearing the boots. There is also a rare Uhlsport promo card again featuring Sol in the boots. He has signed both of these items in permanent black marker. The photograph is slightly creased having been stored with the shirt.

A fabulous rare collection of memorabilia from the former captain of Tottenham Hotspur that comes complete with COA issued by Footy Autographs.

International collectors, please contact us for an accurate courier quote. 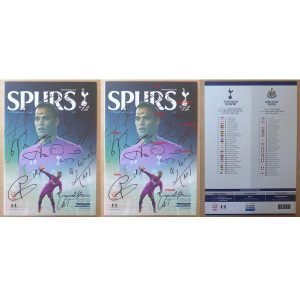 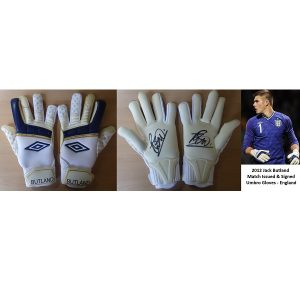 Top of the range Umbro goalkeeper gloves issued to Jack Butland in 2012. The gloves have been pe… 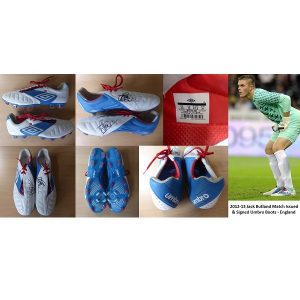 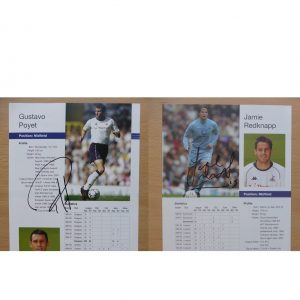